In 2008 after being cleared of cancer I set about raising some money for Cancer Care West by rowing 100km on the Shannon. Cancer Care West is a voluntary organisation set up to fill the gap in our Health system providing support and accommodation to those attending Galway Hospital for cancer treatment. This treatment, although it takes only minutes each day, often extends over six or seven weeks. I took advantage of this facility and after seven weeks stay came away an enthusiastic supporter of the ideas and the staff who run it. "Cheerful Efficiency" is how I would describe it.

After three years of good health and a cancer scare for my wife Dickie I decided it was time to fundraise again. As I will turn 80 this summer I have decided to row 80km this time. Over the weekends of June 18th, 19th and 25th, 26th I will row 80km on the river Shannon starting at Carrick on Shannon downstream to Tarmonbarry and back. I will do this in a rowboat built in Belmount Co. Offaly in 1973 and like me it's beginning to show it's age! All monies raised will go to Cancer Care West.

I will be accompanied at all times by the half barge Alameda (that’s a whole other story!) and my son Pierce in a sea kayak (some other kayakers may join us for the last leg). When it comes to family we have lots of volunteers on hand; my wife Dickie of course and our children Ciaran, Ana, Helen, Colm, Aoife, Bairbre, Mary, Donal, Una and Pierce. The family extends from Auckland New Zealand to California to Brussels but most now live in Ireland. The next generation (depending on age) will lend help or hinder on the day; Tadhg, Killian, Caoimhe, Hannah, Aoife, Liam, Roisin, Daragh, Hugh,Niamh, Conor, Donnacha, Daniel and Jude.

So anyone who would like to send me an 80th birthday present just click the donate button on the right hand side of this page and support my 80 at 80 campaign!

Early Saturday 17th June my son Pierce and I were waved off by friends and family from Carrick quay on the first of 80km. With Pierce paddling alongside in his canoe I rowed downstream through sunshine, wind and (a little bit of) rain. We stopped for lunch at Jamestown and rowed on to Dromod that evening.  We were followed along the way by our cheerleading/fundraising/tea making team in the barge Alameda, despite some mechanical issues (thanks to Mary Thomset for the replacement fan belt!).  We set out from Dromod again the next morning and continued on through Rooskey and on to Tarmonbarry. I took a few days to rest up before setting off again the following weekend on the second leg of the journey. We were joined by some extra canoeists Sinead, Colin, Tanya and my grandson Tadhg for our upstream voyage. We made our way back up from Tarmonbarry, through Rooskey, Dromod and on to Jamestown over the weekend. When we left the shelter of Jamestown Cut we turned into a headwind which very quickly brought the rowing boat to a stop.   At this stage I climbed on board the Barge Alameda but the canoeists carried on into Carrick – more power to them!.   Not to be bested by these youngsters I rowed up the river this morning, Tuesday, to make up the shortfall.   80 Kms. done!
Home
Subscribe to: Posts (Atom)

Dickie and I with the staff at Cancer Care West 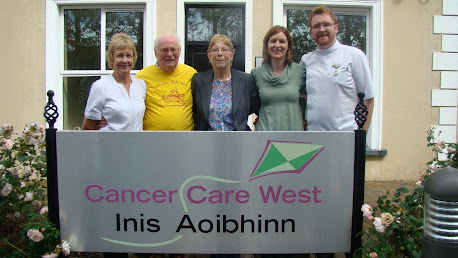 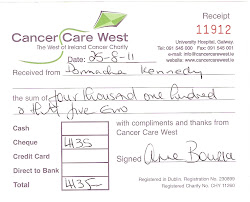 On August 25th I delivered a cheque for €4135 to Cancer Care West. This was a combination of the proceeds from the sponsored row and a collection box at the big birthday bash. Thanks to everyone who contributed so genersouly! 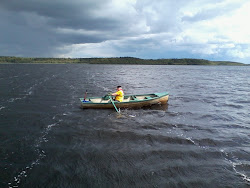 To find out more about Cancer Care West click www.cancercarewest.ie